One of the most isolated indigenous tribes in the Americas: 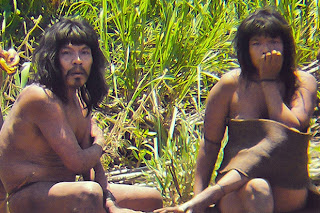 Posted by Malcolm Gault-Williams at Wednesday, August 21, 2013 No comments:

Thanks to the support of Amazon Watch and others, a delegation of 80 leaders and community members from Sarayaku traveled to Quito for a series of events celebrating their historic victory for justice and indigenous rights at the Inter-American Court of Human Rights (IACHR). Read "Amazon Justice" for a summary of last week's events.

In Quito, they held a press conference and a series of public events including a screening of the award-winning documentary, Children of the Jaguar produced by Sarayaku filmmaker Eriberto Gualinga and Amnesty International. The full-length feature documentary documenting Sarayaku's struggle was just released last week. Watch and share it today!

While the screening of Children of the Jaguar was taking place, word began to spread that the government had deposited over $1 million USD into their bank account. This was a cause for celebration, as it was one of the orders of the IACHR sentence. The Ecuadorian government has also translated the sentence into Kichwa and Shuar, publicly posted it, and conducted indigenous and human rights training with military officials. The government has also committed to removing the explosives that the CGC oil company had left behind after abandoning its efforts to conduct seismic testing. The schedule and conditions for removing the pentonite will be determined by the community.

What the government has not done, however, is apologize publicy in Sarayaku. The community is pushing for the apology to come from President Correa himself, which has become a contentious issue. Sarayaku is also calling for the right to "no repetition" – meaning that Sarayaku should not have to go through similar violation of rights again, nor should their indigenous neighbors in southern Ecuador threatened by the 11th Oil Round. We'll keep you updated on what happens next and how your support can continue to make a real and powerful difference in Sarayaku and in all of the indigenous communities defending their territories in the Ecuadorian Amazon.

AW Support for Sarayaku
For over a decade, with the help of many financial donors, Amazon Watch has supported the people of the Sarayaku and have made a difference. From providing the satellite radio to alert allies when the oil company and military were invading their territory, to providing Eriberto with his first video camera and then supporting his training in video production, to accompanying their long battle at the IACHR, to finally celebrating this historic victory. We continue to stand with Sarayaku as they seek a public apology from the President and to ensure that what happened to them, never happens again.

Please consider becoming a member of Amazon Watch and supporting their work:

Posted by Malcolm Gault-Williams at Friday, August 02, 2013 No comments: