An audio documentary on various effects and affects of the Mormon Church's Placement Program:

Many of us who knew Tony Alvis -- close or casual -- envied much of his style as well as lifestyle. Few people know the Sespe backcountry like Tony did. We ALL marvelled at what treats he must have had personal experience with, back there, that we could only hear or read about or see a picture of... Then, there were those of us who are surfers who have shared a particularly exceptional surf session at Rincon with Tony, knowing it was Tony cuz you couldn't miss his beard... I knew him just a little bit, through Lorenzo -- both as a surfer and also a person who walks out into the wonders of the Sespe now and again... The little bit that I knew of him went a long way and I'm thankful for even that... Mystic Trails, Tony.

Here are some Tony Alvis links: 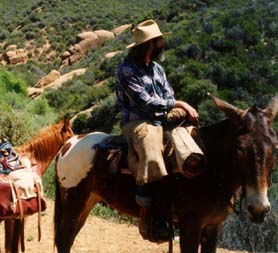 ... and here's the LA TIMES tribute to Tony:


Requiem for a mule packer
Tony Alvis of La Conchita found wholeness in the Ventura County backcountry. Few knew it better or loved it more.


A few months ago, a backcountry daydream took hold in my head. I wanted to go up Sespe Creek, the undammed artery that wriggles high and deep into the Ventura County backcountry between Ojai and the Grapevine. So I called around, and the consensus was clear: I should talk to Tony Alvis.

This guy Alvis, I soon learned, was the only pack outfitter operating steadily in the Los Padres National Forest, a bearded surfer and gifted ironworker who liked nothing better than creeping up the creek alongside a string of mules. If I could get away for three days, he and his beasts could get me to someplace wild and wonderful.

On the phone in November, he was sharp, funny, eager to feed my curiosity. We could go looking for bighorn sheep, he said. Or steelhead. Or condors. Or we could head for a hot spring. We didn't make any concrete plans, but I was encouraged: In the 21st century, within 100 miles of Los Angeles City Hall, there was at least one guy still practicing an Old West profession. Two Old West professions, if you count the ironwork.

He told me he'd been hiking the Sespe for 35 years, since he was 18. He had 36 horses and mules, some of which he kept in a pasture just south of his house. His house in La Conchita.

Now you know where this is going.

Alvis was tall and skinny with a long salt-and-pepper beard and cowboy hat. His friends needled him for looking like Osama bin Laden. On the trail, he liked to surprise customers with rubber snakes and centipedes. Back in town, he downed sushi in vast quantities.

"He knew every creek crossing, every canyon, every Indian artifact. He could tell stories about the Old West, and his house was full of old books from the late 1800s and early 1900s," said his girlfriend in Ojai, Joann Webb. "He was happiest out there in the backcountry. That was his medicine, being out in the mountains…. He called it Tonyland."

"His animals were sound, his packs were tight, and as far as I know, he never had any bad mishaps with clients. And in this business, that speaks for itself," said Austin Curwen, a teacher and riding instructor at Ojai's Thacher School who worked frequently with Alvis.

"He knew the Sespe better than any of us," said Diane Cross, who worked with Alvis as an assistant recreation officer for the Los Padres National Forest.

That's not to say, however, that his schedule always ran smoothly.

"We'd tell clients to meet us at the trailhead at 9 a.m., and he'd routinely show up about noon," said Mike Vaughan, a Ventura firefighter who moonlighted with Alvis on and off for the last 10 years.

"He'd usually had two or three adventures on the way up the hill. He didn't have a clock, so he'd get up late; that's the first thing. Then he might forget the bridles, or have a flat tire. But somehow, he'd show up, crack some jokes, make them happy and pull it off. It was incredible…. He was always on his own time clock. We called it Tony Time."

Chang Liampethcakul, owner of Tipp's Thai restaurant in Ventura, hired Alvis in the 1980s to take his family on a pack trip. They got along so well that Alvis, who loved cooking, started inviting Liampethcakul along as camp cook. For the next 15 years, with customers and friends, the two made three to five trips yearly in the hills, lacing the western scenery with Thai spices. Alvis favored pepper garlic shrimp kebabs.

In late December, when the tsunami hit Asia, Liampethcakul was on a holiday in Thailand. Alvis "left a message for me on my cellphone, saying he hoped I was alive and coming back in one piece," Liampethcakul remembers. "He said he'd pray for me."

On the day of the mudslide, Liampethcakul said, he prayed for Alvis. And called his number, over and over. No answer.

Another of Alvis' friends managed to get through. Around midday, Alvis traded phone calls with Alan Hagman, a Times photo editor and former housemate who knew Alvis for more than a decade.

"He just said his Quonset hut had mud coming down around it," recalled Hagman. Alvis told Hagman he planned to go out and redirect the flow, a familiar chore at La Conchita.

"I'm tired of this," Hagman remembered Alvis saying. "I wanna just go live up in the mountains."

About an hour later, the cliffs came down. Those horses and mules in the pasture were fine, but Alvis, caught digging a trench behind his Quonset hut, was among the first to die. Alvis — the one who'd choose wilderness over civilization every time, the one you'd want by your side if something went wrong in the middle of nowhere — was suddenly nowhere himself.

So now that Sespe daydream of mine has a ghost in it — a friendly ghost with a cowboy hat and a rubber centipede in his pocket. Come spring, I'm going up the creek to spend a spend a few quiet hours thinking about him.
Posted by Malcolm Gault-Williams at Friday, January 14, 2005 7 comments:

I read the book during the last season of falling leaves. I liked it a lot. It jarred a lot of memories within me and helped clarify some things I had not known. So refreshing to get a first-hand account from Dennis, with family info added...


I asked the 19-year-old waitress if she had ever heard of Dennis Banks. No. Of the American Indian Movement? No. Of Wounded Knee? Maybe a book her mother once read? For that historical amnesia alone, the publication of Dennis Bank's memoir, "Ojibwa Warrior," is a welcome event.

Wounded Knee is the site in South Dakota of a great American shame, the massacre in February 1890 of 300 surrendered Lakota men, women and children by the U.S. Cavalry, a wound in the national psyche reminiscent of the current prison scandals in Iraq.

Dennis Banks, one of the founders of the American Indian Movement (AIM) in Minneapolis in 1968, is best known for his role in the takeover in 1973 of the Wounded Knee site by armed Indians, mostly Oglala Lakota but from many other tribes as well.

The story of that occupation for 71 days against a blockade of heavily armed federal agents, including the U.S. Army (deployed in spite of laws forbidding Army participation in domestic conflicts, a decision that undermined federal prosecution of Banks and other occupiers), is one of the chief values of this book, but hardly the only one.

According to Banks, the decision to occupy the tiny reservation town came from a group of Oglalas, including women leaders, outraged at tribal Chairman Dick Wilson, who ruled with patronage and a posse of armed enforcers. At a rump meeting with Banks and other AIM members, the Oglalas decided to make a stand. Because tribal headquarters were fortified with machine guns, someone suggested taking over the tiny village of Wounded Knee. Only later did the symbolic significance of that site arise.

Symbolic it was. A Harris poll cited by Banks showed that a majority of Americans who were aware of the issues at Wounded Knee were sympathetic to the takeover. For Indians nationally it was a galvanizing event.

In the 1940s and '50s of Banks' youth, the federal and state government's quiet war on Indian identity was in full swing, in big and small ways. In 1942, 5-year-old Banks was forcibly taken from his family and sent to boarding school. By the time he returned to Leech Lake 11 years later, a whole way of life had changed. The new practice of licensing "sportsmen" for hunting and fishing effectively cut out Indians who had hunted and fished year-round for a major part of their food supply.

"Ojibwa Warrior" covers other key events in the life of Banks and the growing reputation of AIM, including a helpful friendship with actor Marlon Brando; an encounter with Jim Jones, the paranoid Kool-Aid preacher, and, even more bizarre, William Randolph Hearst Jr., who enlisted Banks' aid to seek the release of his kidnapped daughter.

Banks spent much of his time after Wounded Knee running from a state-riot conviction in Custer, S.D., pursued relentlessly by then-Attorney General William Janklow (yes, that Janklow). Banks evaded capture for more than 11 years before finally turning himself in to serve 18 months in South Dakota prisons, an experience he portrays in a surprisingly positive light.

There is also much that Banks leaves out. Near the end he offers up a mild mea culpa for being a "poor father" to the many children he fathered with several women - one could easily add "miserable husband," were his women to have their say. Indeed, his longest-term common-law wife, Kamook, on whom he lavishes much praise throughout the book, recently testified in court against the darker side of AIM.

Predictably, he protests the conviction of his friend Leonard Peltier in the death of two federal agents in a chaotic Pine Ridge fire-fight, whereas numerous dispassionate outsiders have come to a different conclusion.

Finally, he only gingerly touches the third rail of AIM, the 1976 murder of AIM member Annie Mae Pictou-Aquash. He does the reader no service by tarring AIM's accusers as "goons and FBI-lovers" for seeking justice for Annie Mae and her family. Recent disclosures, pursued by brave Ojibwa journalist Paul DeMain of Indian Country Today, have helped convict one AIM member of her murder; another awaits extradition from Canada.

Banks' story, for all its ambiguities, remains important, not only for AIM history but also for the arc of his own life. Now an elder back at Federal Dam, Minn., the man who could have been killed so often throughout his passionate rebellion against repression runs a natural-foods business. Some of his old warrior friends are officials in newer, friendlier tribal governments. It is a more just world for Indian people that he, with many others, helped stir into life.

With great help from the self-effacing Erdoes, who has assisted in numerous valuable books on Indian life, Banks makes an important contribution to recent American history, while jogging our collective memory. But "Ojibwa Warrior" is not destined to be the last word on AIM, or, for that matter, on Dennis Banks.

Some discussion about the terms "Native American" vs. "American Indian" at the Indianz.com message board: